This recipe takes the concept of the simple ham and cheese and makes it a little more special with the use of Rougette Bavarian Red, yet it’s still simple, fun and easy to make, especially if you use pre-made dough! Perfect for game day, or any other day you’re craving comfort food!
Image and recipe source: Frank Huebner, A Collection of Delicious Recipes

1. Preheat oven to 375 degrees.
2. Cut Rougette into ¼” slices; trim rind (optional)
3. On each triangle of dough, place a slice of ham so there is about a half an inch of overhang over the shortest base of the triangle.
4. Place a slice of Rougette on the ham. Roll the edge of ham over the top of the cheese, then starting from the shortest base of the triangle, roll the dough over the ham and cheese, and toward the opposite point of the triangle, until the entire triangle is rolled up.
5. Pinch the edges slightly inward and place on cookie sheet.
6. Brush with egg white.
7. Bake for 15 minutes, or until golden.

1. Mix yeast, salt, and sugar into the measuring cup of warm water until dissolved. Let stand 5 minutes, until a foamy surface forms. (If the foamy surface doesn’t form, this is a clue that your water was too warm and killed the yeast.)
2. In a medium bowl (or a stand mixer if you have one), make your dough. Combine the flour, sugar, salt, milk, oil, and yeast mixture.
3. Once it comes together (it will be a rough, slightly sticky mass), put it on a lightly floured surface and knead it. To do this, fold the dough in half towards you, then using the base of your palm, push the dough away from you firmly, in a light rolling motion. Rotate the dough a half quarter turn and repeat. Add a bit of flour if the dough gets sticky. Keep kneading in this manner until the dough is smooth. (Another good test is to gently press your finger into the dough. If it springs back, you’re ready to take a rest.)
4. Put the dough in a bowl, cover it, and let it rise at room temperature until double in size, about 1–1 ½ hours.
5. Punch down the dough and form it into a ½” patty. Wrap it in plastic or wax paper and chill for 30 minutes.
6. About half way through your dough’s chilling time, take out the butter. Between two sticks of waxed paper, flatten the stick using the rolling pin, until it is about a ¼” thick than roll it even flatter into a 5″circle. This will take some elbow grease. By the time you’re done, your butter will likely be softened, so firm up again by putting it in the fridge for 5–10 minutes before proceeding.
7. Take out the dough and roll it into a 9″ circle. Place the chilled butter in the middle of the dough and fold the dough over the butter like you are making an envelope.
8. Lightly flour the dough and begin to roll the envelope out into a 5″ x 15″ rectangle. The butter may ooze out as you do this, so just pinch the dough around it to keep it in.
9. Once you have the rectangle rolled out, start from the short side, closest to you and fold one-third of the rectangle up. Then fold the top one-third over the bottom third (like you’re folding a letter). Turn this rectangle so that the short side is now closest to you and roll it out into a 5″ x 15″ rectangle again. Fold as you did before. 10. Wrap it in plastic wrap or wax paper and chill it for 2 hours.
11. After the dough is chilled, take it out and repeat steps 8 through and 10 twice.
12. Finally take the dough out, roll it into a 5″ x 20″ rectangle. Cut it in half. Chill one half. Then roll out the remaining half so you get a 5″ x 12″ rectangle.
13. Cut the remaining half into thirds. Chill two of the thirds while you work with one. Roll the third into about a 5½” square. Cut the square in half diagonally to form two triangles.
14. Roll each triangle out so that the length of the shortest base to the opposite tip is about 7″. Proceed with Rougette and Ham croissant recipe above. 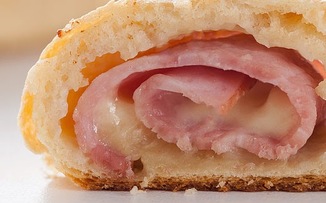 Print Recipe Pin Recipe
Tried this recipe?Let us know how it was!