Cheese to Warm the Soul

Stacey
Oct 26, 2018 Blog, The Cheese Course Comments Off on Cheese to Warm the Soul
print
I love cheese and cheese loves me.  We’re good together.  Much as I love our relationship, it can get a little complacent.  How many wedges of brie was that last week?  I lost count after Wednesday.  I need something heartier as the cold weather sets in.  I need comfort cheese.  I need – fondue!

Meltingly gooey fondue does something to me that a rich, buttery, brie simply can’t.  It warms my soul. Then there’s the action of plunging a cube of hearty bread into the pot to see how much cheese can stick to it without losing it from my spear.   Oh, I long to be that cube of bread.

Fondue has never been more hip.

But the origin of the dish was actually created out of necessity.  The brisk winters in the small villages of Switzerland left its people scrounging for nourishment.  Too far from larger towns where fresh food was abundant, villagers relied on cheese and bread made during the summer months for their meals.  But, the wheels of cheese had turned hard and impossible to eat and the bread had become stale.

Out of curiosity (and more likely boredom), one of the villagers held a piece of cheese over the fire.  As the cheese began to glistened, it slowly softened and dripped in a long, oozing string on to the fire.  He tasted it and discovered that it was more palatable to eat this way.  The news traveled fast and soon the entire village gathered around to watch; each villager waiting his turn to slurp up the runny cheese with a hunk of stale bread.  The communal event soon became ritual and a cast-iron pot, called a “caquelon” was designed to contain the melted cheese and long forks were used to dip the chunks of bread. 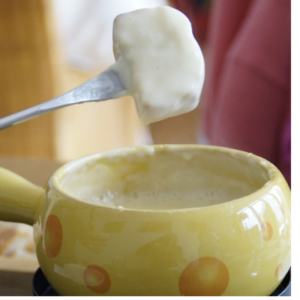 If it weren’t for the ingenuity of these alpine villagers I wouldn’t have the collection of caquelons or fondue pots I have today.

It’s been nearly a year since I’ve made cheese fondue but I can always tell when it’s time:  the air is brisk, the fireplace is lit at night and exactly sixteen months have gone by since the alpine cows have been milked to make these wonderful cheeses I crave right now.

Emmental is made from partially skimmed, unpasteurized cow’s milk.

As most alpine cheeses, the wheels are very large, weighing in at up to 220 pounds each.  Be wary of imposters made from non-alpine pasteurized milk; you’ll know the real deal because the rind will be stamped with the word “Switzerland”.  Fresh Emmental has a smooth, beige rind and the characteristic large eyes or holes in the paste the size of quarters.   Its flavor is sweet, buttery, nutty and fruity with a smooth mouthfeel that coats the palate.

Few cheeses can transport you to their origin but a well-aged Gruyère can make you feel as if you’re standing in the middle of the alpine flora.  Made from unpasteurized cow’s milk, the best Gruyères reach their full potential when aged for at least 16 months.  Absent of the Swiss cheese holes, the creamy, beige interior has an assertive flavor with hints of fruit and nuts.   It’s everything Emmental isn’t and wishes it were.

So, how do you combine these two cheeses and create a hip fondue party that has everyone moaning for more?  The recipe below is a good starting point, but there are thousands of recipes that have since been created.

Having been around now for several hundreds of years, many “rules of etiquette” have been created to keep the ritual of preparing and serving fondue sacred:

We’d love to know some of your very best stories of fondue parties.  We know you have them so spill the beans below in the comment section.