To honor mothers and other women in our lives on Mother’s Day weekend,Tastings Gourmet is celebrating women cheesemakers.  They’ve  revolutionized cheesemaking in the U.S. These “mothers of cheese” are Jean Mackenzie, founder of Mackenzie Creamery; Judy Schad, founder of Capriole; and the three Giacomini sisters from Point Reyes Farmstead Cheese Company.

Jean Mackenzie entered cheesemaking almost on a fluke. She attended a cheesemaking course while on vacation, and five months later Mackenzie Creamery was born. At 61, she had finally found her true calling!

Following years as a flight attendant on Air Force Two (Lyndon Johnson was vice president), executive secretary, and real estate agent, she became a cheesemaker – the career she was born to, she says. At the time, Jean was only the second licensed goat cheese producer in Ohio. Thanks to her leadership, more than 20 creameries are thriving in the state, and her influence is now felt throughout the entire American cheese world.

Mackenzie Creamery is known for producing goat cheeses in small batches using local ingredients. Proving once again that good milk makes good cheese, Mackenzie purchases 100% hormone free rBST milk from two dairies that milk exclusively for them. Only the freshest milk is used. Not only does the cheese taste great, it was produced using green, sustainable practices. For example, the buildings on the 30-acre farm are insulated with newspapers and blue jeans. Buying local ingredients, supporting and promoting local businesses, and incorporating sustainable practices are hallmarks of Mackenzie.

The flavor of Mackenzie cheese is unmatched. It is described as rich, creamy, and naturally tangy with a clean finish. Jeni’s uses only Mackenzie goat cheese in its gourmet ice cream, and chefs throughout Ohio and the region feature Mackenzie’s fresh Chèvre on their menus.

Jean herself is constantly thinking of new recipes and ways to use the Chèvre. She is a true innovator and is constantly experimenting with new flavors.

Not only is she a founding mother of cheese, she is also the mother of two children who have followed in her footsteps. Son Rob DeMuch now runs the operation and daughter Liz Alvis worked there as well before starting her own creamery in Oregon.

Mackenzie Creamery has earned more than 20 awards from respected organizations including the American Cheese Society.

Three sisters, part of a family that has been dairy farming for more than a 100 years, run one of the west coast’s most renowned cheese companies. Each of the sisters plays an essential role in the success of Point Reyes Farmstead Cheese Co. Jill Giacomini Basch is chief marketing officer, Lynn Giacomini Stay is the chief operating officer, and Diana Giacomini Hagan is the chief financial officer. Located in Marin County in northern California, Point Reyes has been making artisanal cheese for nearly 20 years, but its history is much deeper. Prior to its transformation to artisan cheese, it had been a dairy farm for several generations and was known for its quality milk.

By the mid-1990’s the size of the Holstein herd had grown too large, causing stress to the land. Clearly, something had to change. But, as the Giacominis say, when life gives you four daughters, make cheese. All four daughters had pursued successful business careers, but they returned home to help reduce the size of the dairy and turn the business into an artisan farmstead cheesemaking facility. Three of the daughters still run the company. According to the family, their goal was “to create something that would combine our mutual appreciation of farm fresh food, our love for the land where we were raised, and our desire to keep our family’s legacy alive for future generations.”

Now, it’s an A to Z operation. Everything from milking the cows to stirring the curd is done on site, giving the family complete quality control.

Point Reyes’ first wheels of Original Blue were created in 2000, and the artisan cheese world ecstatically welcomed the sisters. The Giacominis have found tremendous support from other women-led cheese businesses in northern California.

For the first nine years, Point Reyes made only Original Blue, but the last ten years have seen the development and growth of new cheeses: Fresh Mozzarella, Toma, Bay Blue, Gouda, and others. Its award-winning cheeses have won over customers and cheese sellers throughout the U.S.

Point Reyes’ success is due largely to the sisters’ personal style of business and creativity. In 2010, for example, the sisters launched The Fork as a culinary education center on the farm where chefs, retailers, distributors, and consumers can learn about the cheesemaking process and enjoy meals featuring Point Reyes cheese.

The sisters added a second creamery last year in nearby Petaluma, and they’re expanding the international reach of their cheeses by selling in Canada, Hong Kong and Singapore. 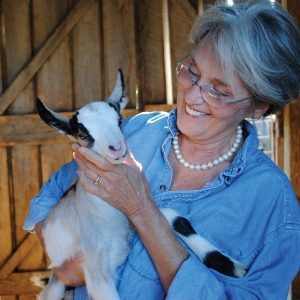 A pioneer of goat cheese in America, Judy Schad of Capriole was among a handful of women who started the artisan Chèvre movement.

Her dream (while working on her PhD in English) was to own a farm, and she and her husband bought one in the rolling hills of Indiana not far from their home in Kentucky. She fell in love with goat’s milk and goat cheese and decided to try her hand at it.

Trading in the life of a college professor for the life of a cheesemaker and farmer was harder than she thought. “We all got into this business with the romantic notion that we’d be scooping curds all day and listening to Mozart,” she told one magazine. “What a crock!”

When Schad started out, there were no farmers in the area whose brains she could pick: no one was operating a goat dairy, much less making goat cheese. She had to learn it on her own and with the help of other goat cheese makers she’d meet at cheese conferences around the country.

Through many trials and many errors, Judy landed on some excellent Chèvre. Her philosophy is to love what you make and to make it personal. You can taste the love and care in Capriole cheeses.

She made her mark in 1988 when the creamery’s Wabash Cannonball Cheese was named Best of the Midwest at a competition in Chicago. She and her cheese started to get some well-deserved attention. It was the first of many significant awards she has received. But Schad’s goal is not to win awards; it is to make excellent cheese and to keep innovating. She’s definitely living the dream. 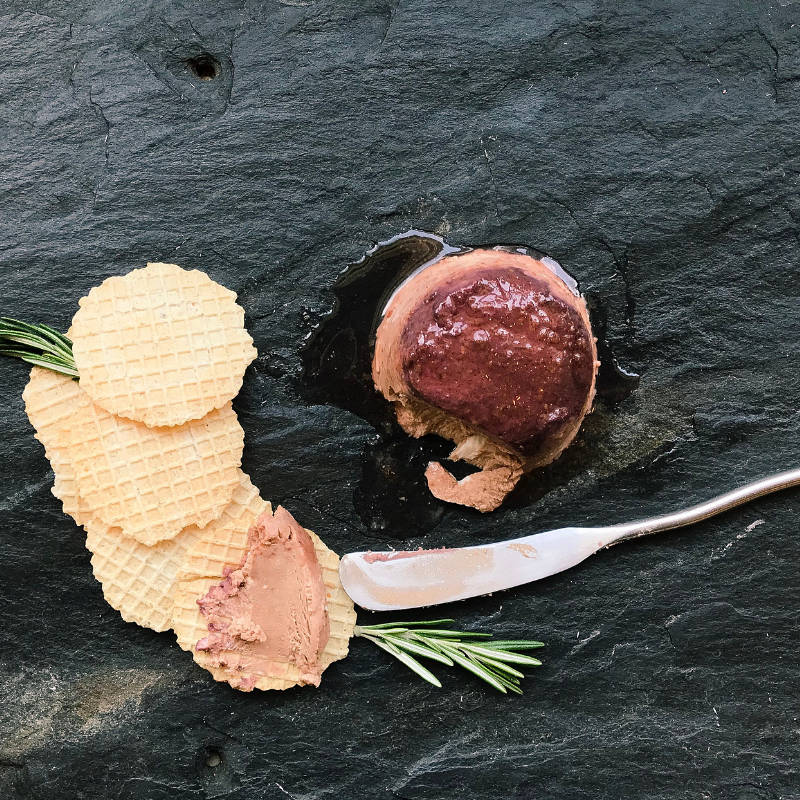 A chocolate and cheese lover’s dream, this lovely cheese would be great to serve on Mother’s Day.

When we told Jean Mackenzie we’d be featuring her and one of her cheeses at this week’s tasting, she was delighted we chose the Chocolate Raspberry Chèvre:

“That is the only flavor that I sat down and ate the entire thing alone in one sitting!! It’s like chocolate cheesecake! So often, at farmers’ markets or demos, people will ask how to serve our cheeses. Our reply most often is, ‘With a spoon!’”

Like Jean, we’re fond of the cups with the sauce on the bottom because all you have to do is open the package, turn it upside down on your cheese board, and, voila, you have a fabulous appetizer! In this case, you’ve got the perfect dessert. 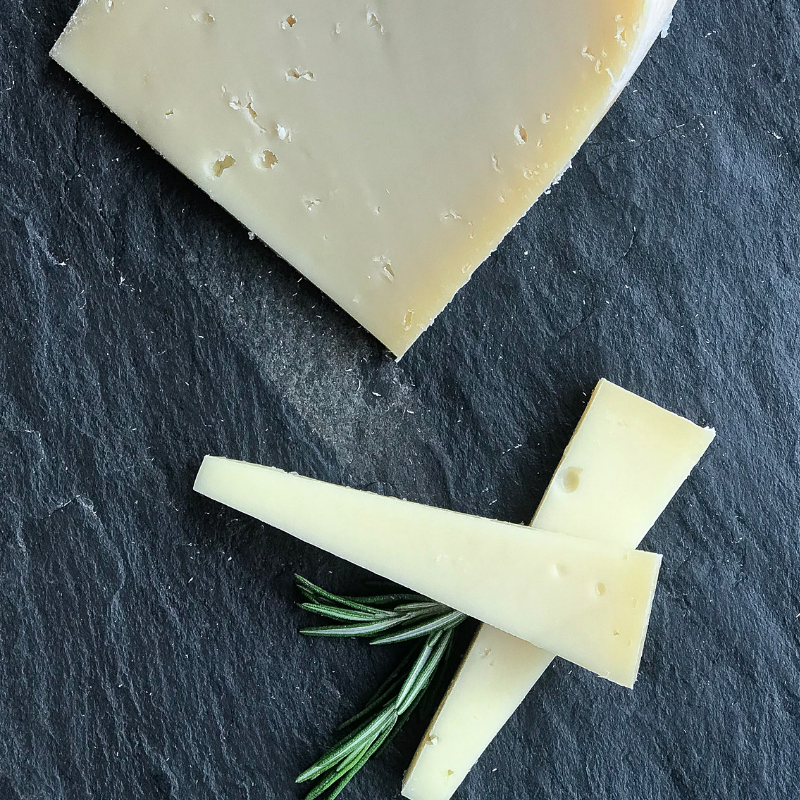 Toma means “cheese made by the farmer himself” in Italian. Was it ever! The cows are raised on the same ground on which the cheese was made. As a true farmstead cheese producer, Point Reyes uses Grade A milk from the herd they’ve raised since birth right on the property. Also, the pastures on the farm produce the certified organic grass that accounts for the majority of the herd’s diet, keeping the cows happy and healthy.

The winner of numerous cheese awards, Point Reyes Toma in 2017 took the bronze at the World Cheese Awards, and a first place in Farmstead Cheeses at the American Cheese Society Awards the same year.

Point Reyes posts a number of recipes on its site, including this one for Butter Lettuce Salad with Oranges, Avocado, Almonds, and shaved Toma and this one for Twice Baked Fingerling Potatoes with Point Reyes Toma. 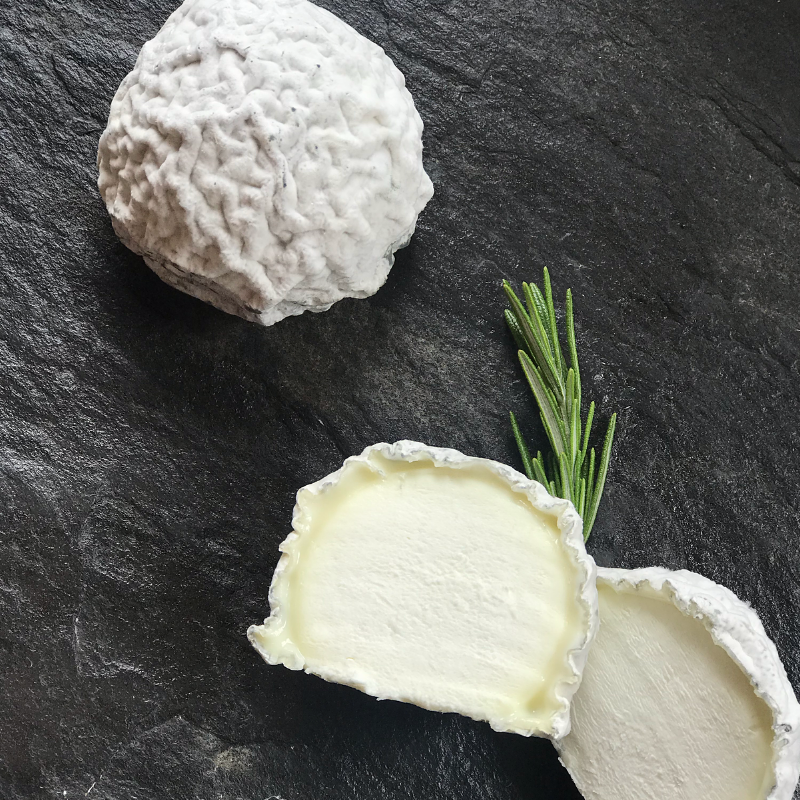 Wabash Cannonball comes very close to the taste of the French Chèvre. Aged just ten days, it has a complexity unusual for a cheese so young.

Not only is it Capriole’s most popular cheese, it has earned critical acclaim provided to few other cheeses. Winner of numerous awards, its crowning glory was Best in Show at the American Cheese Society’s 1995 competition. Liz Thorpe, author of The Cheese Chronicles, calls it “the most delicious thing I had ever eaten…and it was the cheese that resurrected all the reasons why I’d become interested in cheese in the first place.”   You’ve got to try this cheese!

These balls of goat cheese goodness are covered with a thin, delicate rind with a light dusting of vegetable ash. The ash helps it ripen and gives it a delightfully mellow flavor profile of fresh flowers and sweet corn. As it ages, the rind creates deep wrinkles and the ash begins to seep through the rind. At its peak, it becomes drier and crumbly. Every stage is delicious!

Capriole founder Judy Schad attributes the flavor profile to the goat’s milk and the limestone in the soil.   “What limestone does for Kentucky bourbon, it also does for my goat milk,” Judy says. “The limestone base makes for sweet grasses, alfalfa and clover — and more flavorful cheese.”

Origin: Greenville, Indiana
Producer: Capriole Farms
Milk: Pasteurized goat
Rennet Type: Animal
Age: 7 days
Look: Like little cannonballs. Just 3 oz. each, the cheese can be cut into four servings. The surface is dusted with a blue-green vegetable ash to promote ripening.   The cheese itself is snow white.
Rind: Dusted with ash. Mold-ripened.
Feel: Soft to semi-soft, creamy
Smell: Barn-y
Taste: Citrusy, bright, tart. The ash adds a sour and bitter flavor similar to grapefruit.
Pairs well with: Figs or juicy red fruits like cherries, raspberries, or strawberries. On a cheeseboard as, or before, dessert. Try it with grilled figs and prosciutto. https://www.capriolegoatcheese.com/grilled-figs
Tastes good with: Chilled Sauterne, a crisp Sauvignon Blanc, or a sweet Moscato 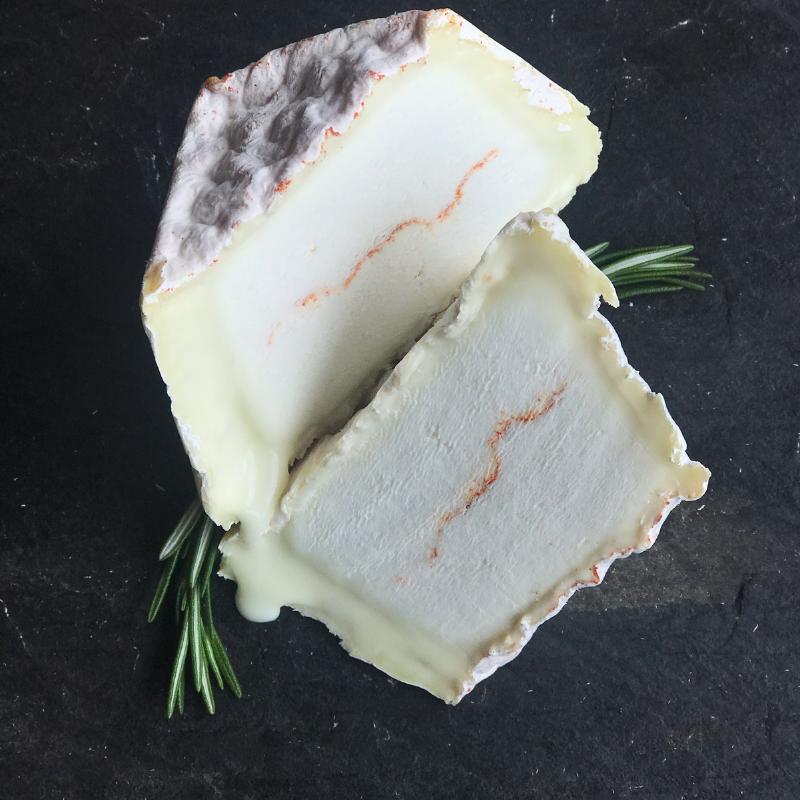 A real beauty, this orange-hued cheese is named after Judy Schad’s red-haired granddaughter. Piper’s Pyramid is modeled after French Valencay, a Loire valley goat’s milk classic. Lovingly hand-ladled into individual molds the shape of truncated pyramids, it is then dusted with paprika. Piper has a light, airy texture that gets more dense and buttery with age.

Winner of many American Cheese Society awards, including in 2016, Piper is a true high-end goat cheese. It will look gorgeous on our cheeseboard.

It belongs on a cheeseboard says Capriole founder Judy Schad, not mixed into a sauce or risotto. Its flavor and complexity of its rind makes it a solo cheese, and is best served as the star of your cheese tray.