In honor of International Women’s Day (March 8), we’re celebrating women and their contributions to the world of cheese.

Our cheeses this week come from two of America’s best creameries – both founded by women. Mackenzie Creamery (Ohio) and Cypress Grove (California) are the result of the work of two inventive and creative women: Jean Mackenzie and Mary Keehn. And our product of the week comes from a company founded by an English woman, Ann-Marie Dyas.

Jean Mackenzie entered cheesemaking almost on a fluke. She attended a cheesemaking course while on vacation, and five months later Mackenzie Creamery was born. At 61, she had finally found her true calling!

She is a true innovator and is constantly experimenting with new flavors, and we’re pleased to treat you to one of them this week. You can read more about Jean here.

Known for its outstanding goat cheese, Mackenzie Creamery uses traditional methods to create its award-winning Chèvre. Its all-natural, handcrafted artisan cheese is made from hormone-free goat milk from local farms. You won’t find a smoother or fresher Chèvre anywhere!

What would make it even better? How about some sassy sour cherries combined with a hint of Kentucky Straight Bourbon Whiskey? The cheese comes in a 4.5 oz. cup with the cherry Bourbon sauce on top. To enjoy this amazing combination of Chèvre with cherry sauce, let it come to room temperature and simply turn the cup upside down on your cheese plate. Dig in with pieces of crusty baguette or crackers. 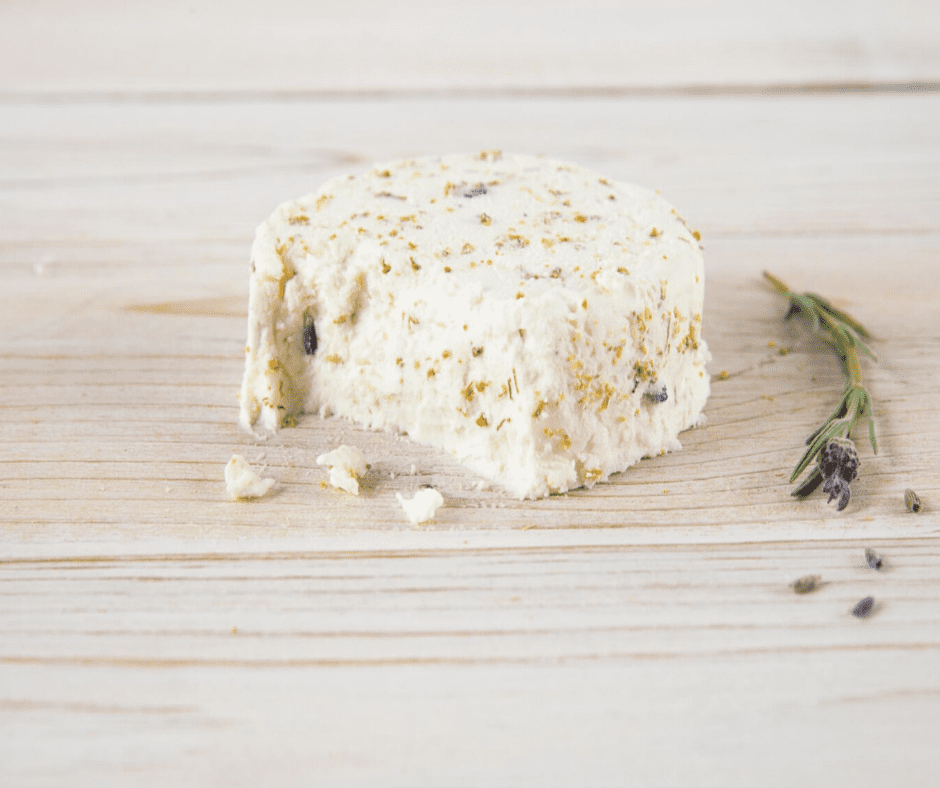 Mary Keehn’s contribution to cheese began with her role as a mother who wanted her children to have goat’s milk. In the 1970’s, goat’s milk was not commercially available and so Mary began raising and milking her own goats. Before long, that grew into her experimenting with cheesemaking.

Mary is clearly a woman with a sense of humor: all the cheeses have funny and creative names: Lambchopper (with its label of a goat riding a Harley), Humboldt Fog (with its sly nod toward the most famous crop in Humboldt County, CA), and others named after songs (Sgt. Pepper, Little Red Corvette, Purple Haze).

Purple Haze is in my brain — and on my cheeseboard — this week. It gets its name from the Jimi Hendrix classic and from the lavender in the cheese. The flakes of tender, purple lavender buds and fennel pollens create an addictive mix atop the soft, creamy cheese: you’ll be glad you bought two!

And, should you be so lucky as to have some left over, you’ll find that Purple Haze lends itself to recipes. Here are few to try: whipped into a tangy cheesecake, melted into a gooey sandwich, or turned into icing for cupcakes.

If you hate goat cheese, you’ve probably never tried Midnight Moon. Midnight Moon does not have the tart, tangy flavor people associate with goat cheese. Instead, it is unbelievably delicious with a nutty and brown butter flavor and an intense caramel finish.

Made from goat’s milk in Holland and then shipped to the U.S. for additional aging, Midnight Moon is the result of Dutch expertise in Gouda making and Cypress Grove’s insistence on using only the finest goat’s milk. This is a Gouda-style cheese with a smooth, dense texture, studded with protein crystals, which give it a slight crunch.

Not only is Midnight Moon popular among consumers, the critics love it, too. It won the best new product award from the Specialty Food Association in 2002, and has gone on to win the Super Gold in the 2015 and 2018 World Cheese Awards.

Excellent for parties, it looks striking on a cheeseboard with its black wax contrasting with the beautiful ivory-colored cheese.