Washed-Rind Cheeses have an allure only a cheeselover can explain

“Stinky” is not an adjective I like to use when describing washed-rind cheeses even though the smell of them has been likened to everything from dirty gym-socks to rotten eggs.  For the uninitiated, the smell can make you bolt for the door but, like a shiny pearl in a barnacle-covered oyster shell what lies inside is cheese nirvana.

This is a classic case of the bark being worse than the bite and I have to admit that until my epiphany moment I stayed far away from these nose-stinging cheeses. I encourage you to step outside of your comfort zone of buttery bries and everyday cheddars to enter the surreal world of washed-rind cheeses. 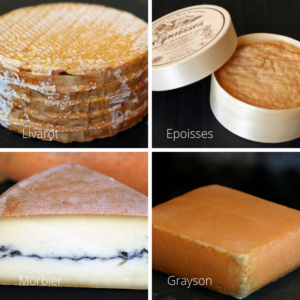 The main culprit behind the smell of all washed-rind cheeses is a microscopic organism called Brevibacterium Linens or B. Linens for short. Throughout the cheesemaking process, these cheeses are bathed, brushed or rubbed with brine to keep the surface moist and provides a natural environment for the B. Linens to grow.  This aggressive bacterium produces a pinkish-orange hue on the surface of the cheese and emits an odor that only cheese enthusiasts crave.

Sometimes alcohol is added to the brine to enhance the flavor and bring character to the cheese.  Among the most well-known washed-rind cheeses are French Époisse, Belgian Chimay, German Limburger, Spanish Mahon, and Italian Taleggio. Made from either cow’s, sheep’s or goat’s milk, cheesemakers are enthusiastically experimenting with this difficult-to-make cheese and new ones are being introduced every day. Some making names for themselves in the U.S. include Red Hawk from California’s Cowgirl Creamery, Grayson from Virginia’s Meadow Creek Dairy and Pleasant Ridge Reserve from Wisconsin’s Uplands Cheese Company.

Because washed-rind cheeses are often salty and pungent, finding a wine partner can be a bit tricky.  For white wines stay on the floral yet dry side.  Rieslings and Pinot Gris work well as do non-oaked Chardonnays.  If you’re looking for a red wine partner you need to consider how flavorful the cheese is. Reds with lots of tannins and oak do nothing in the presence of a strong washed-rind cheese.  Better to find a light fruity red wine to please the palate.  Sweeter wines also pair well with this category because the residual sugars in the wine balance the natural saltiness of the cheese.

Fleur des Alpes is a new Reblochon-style [reuh-bluh-SHOHN] cheese produced by Fromagerie de la Tournette located in the Savoie region of France.  Genuine A.O.C. protected Reblochon is made with raw cow’s milk and unfortunately is too young to be imported into the United States.  It ranks in my book as one of the greatest cheeses produced in France. However, this modern pasteurized version is equally complex, layered, and daring with hints of mushrooms, truffles, and eggs. It has a light pink tinted rind enveloping a smooth creamy paste that can tame even the most savage beast. It is best eaten in early summer through fall when the milk is rich and at its highest fat content.  Fleur des Alpes finds its best wine partner in soft reds such as California Pinot Noir and Zinfandel or spicy crisp whites such as an Alsatian Gewurztraminer or German Riesling.

Époisse de Bourgogne [ay-PWAHSS duh boor-GUHN-ANYUH] is one of the more familiar washed-rind cheeses found in cheese shops and on cheese trollies at fine restaurants. It’s said that Napoleon called it his favorite and the famous food writer Brillat-Savarin crowned it “The King of Cheeses”.  Époisse is washed in Marc de Bourgogne, the local pomace brandy distilled from skins and seeds leftover from winemaking. When it’s young the rind has a light orange color and the small round wheel is rather firm.  As it ages, the B. Linens do their work softening the cheese from the outside in and deepening the rind to a reddish-brown.  This is a telltale sign that the inside is ready to be scooped with a spoon and smeared on a slice of crusty baguette.  Sold in its distinctive round wooden box to preserve its shape, Époisse is best served with a good red Burgundy or even a Sauterne.

If a cheese could possess a soul it would be found in the little known Le Poteaupré [leh po-tuh-PREY] from Belgium. Since 1862 the Cistercian Trappist monks of Chimay have been producing full-flavored beers and washed-rind cheeses to support their religious foundation. One of four kinds of cheese with the Chimay name, Le Poteaupré is a delightful experience to be enjoyed with all of the senses. The suppleness of the smooth, creamy paste coats the tongue while the aroma hints of toasted hazelnuts.  It’s the richest of all the Chimay cheeses and pairs perfectly with a Belgian beer or light red Bordeaux wine.

The best of the washed-rind cheeses will have a long and lasting finish.  They can start off mild and continue to grow in flavor or they might begin full on and remain that way.  In either case, these never boring cheeses will leave an enduring memory on your palate and your cheese course will never be the same.